Presentation by Dr. Matt Mallinson, Mayor of Sugar Creek, and Audrey Elder, historical property specialist and owner of Past to Present Research

These dedicated local historians will talk about the pioneers, gold prospectors, traders, goods and wealth that came out of Wayne City Landing, one of the first steamboat landings in western Missouri to connect to the Santa Fe Trail. This is the only location in the country where four National Historic Trails – the Lewis and Clark, the Santa Fe, the Oregon and the California – overlap. 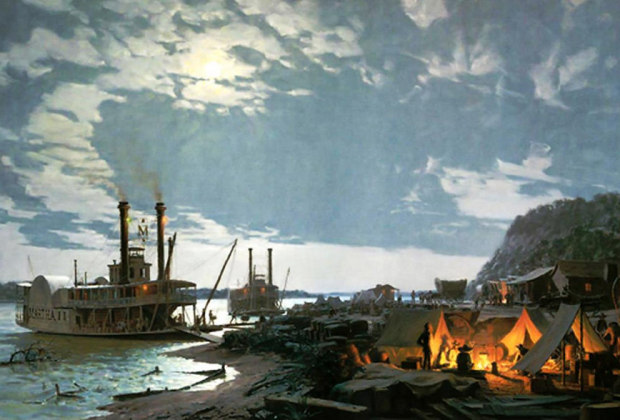 Presentation by Dr. Matt Mallinson, Mayor of Sugar Creek, MO, and Audrey Elder, historical property specialist and owner of Past to Present Research

PLUS – This presentation will be streaming live on KCDV.tv!

In the 1830s, the way west for goods and pioneers was up the Missouri River to Wayne City Landing. The landing no longer exists but the bluff overlooking it is in the town of Sugar Creek now. Offloading at the Landing, the pioneers and the goods then made their way uphill to Independence and from there headed west on the California, Santa Fe or Oregon Trails. The port was named Wayne City Landing to honor Lt. Anthony Wayne who camped on the bluffs in 1825 while keeping the Kaw Indians confined to their land to the west.

The first railroad west of the Mississippi River was built between Wayne City Landing and Independence to accommodate the traffic of people and supplies the river delivered from the East. It operated on wooden rails with ox-drawn carts from 1850 to 1852.

Two dedicated local historians, Dr. Matt Mallinson, Mayor of Sugar Creek, and Audrey Elder, historical property specialist and owner of Past to Present Research, will talk about the pioneers, gold prospectors, traders, goods and wealth that came out of Wayne City Landing.