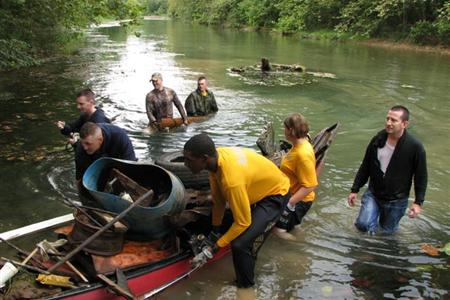 The Missouri Stream Team program brings together the expertise and resources of statewide science and conservation agencies with the passion and local knowledge of Missouri’s stream-loving public. We’ll get the Stream Team story from several river veterans.

Chris is the Stream Team Coordinator for the Missouri Department of Conservation in Jefferson City. He has a Bachelor of Science Degree in Fisheries and Wildlife from the University of Missouri – Columbia and a Master of Arts in Environmental Studies from the University of Central Missouri in Warrensburg. He began his career with the Missouri Department of Conservation in 1992 as a Fisheries Research Aid, working on the catfish project below Truman Dam, then on the Crayfish Crew on the Jacks Fork and Big Piney Rivers. Chris began working with the Stream Services Unit in 1999. From 2007 to early 2017 Chris coordinated the Stream Team’s Volunteer Water Quality Monitoring Program statewide.

Local Stream Team Veteran Larry Ruff will share a chronology of his experiences as an active and innovative Missouri Stream Team member. Larry has been on the Board of Directors of Greenway Network since 1999 and is currently serving as Treasurer.

Larry after a 31 year teaching career retired from Francis Howell North high school as the Science Department Chairperson. During his tenure he taught most of the biological sciences and co-authored the Environmental Studies curriculum for the Francis Howell school district. He was Francis Howell North’s Teacher of the Year in 1999 and has been named Who’s Who Among American Teachers five times.

A special thank you to Greg Poleski  of Greenway Network for making this happen!