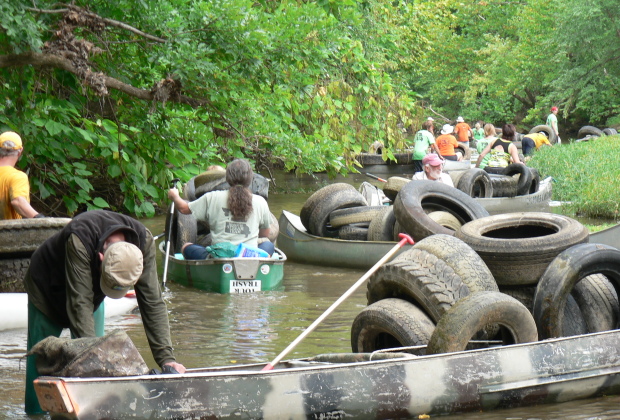 Representatives of over a dozen Missouri Stream Teams removed over 400 tires in one day by canoe on the Big River as part of Operation Clean Stream, August 26, 2012. photo by Steve Schnarr.

Like a lot of Missourians, Mark Van Patten spent a lot of time on, in and next to a favorite river. His heart belonged to the Roubidoux Creek in Pulaski County. As he became disturbed by the amounting of dumping and debris in his favorite river, Mark decided to do something about it. With his friends, the Roubidoux Fly Fishers, he organized a Roubidoux River Cleanup in 1988, removing 14.7 tons of debris in just a couple days. When he heard that the Conservation Federation of Missouri was beginning a new statewide river cleanup program for volunteers, Mark signed up as Missouri Stream Team #1.

Since those inspiring beginnings, the Missouri Stream Team program has exploded in numbers and in the diversity of work that is being done for Missouri waters. 25 years since its founding, there are now over 5,000 Missouri Stream Teams all over the state. Volunteers do water quality monitoring, stream health training, riparian restoration and tree planting, litter pickups and river access adoptions, storm drain stenciling, advocacy, education and much more. Missouri River Relief and Friends of Big Muddy, co-hosts of the Rocheport Big Muddy Speaker Series, are all member organizations of Missouri Stream Team.

The program has been a model for citizen water engagement in the country and receives major support from the Mo. Dept of Conservation and the Mo. Dept. of Natural Resources.

Mark Van Patten will join us to share his Missouri Stream Team story, and the stories of many of the amazing citizens that give their blood, sweat and tears to this amazing endeavor since its beginning 25 years ago.

Mark Van Patten is as a Fisheries Management Biologist for the Missouri Department of Conservation working as a Stream Team Biologist for the Southeast and St. Louis region in Missouri.  He coordinates the activities of Steam Team volunteers throughout his region empowering them to take an active stance in protecting and preserving the rivers and streams they love.  As a private citizen he founded the first Stream Team in Missouri in 1989. Mark earned his Bachelors in Biology from Lincoln University and a Masters in Education from William Woods University.  In his personal time he is a published author and for 13 years hosted a national weekly PBS Television show on fly tying Called “The Tying Bench.”  Mark his wife Regina live in Tebbetts, MO, and enjoy fly fishing, hiking, and bird watching together.
————-