“We All Live Downstream” – Standing for Standing Rock in Missouri

Regional activists discuss their work supporting the camps upstream on the banks of the Cannonball in North Dakota protesting the Dakota Access Pipeline. 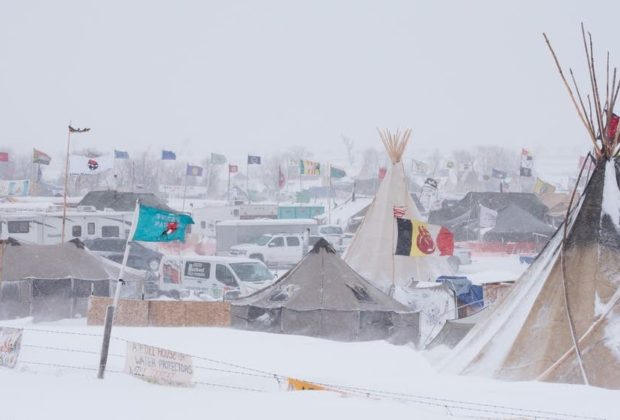 The Oceti Sakowin Camp, the largest of the Standing Rock encampments, the morning after a several day blizzard at the end of November. Photo by Angela Jimenez for MPR News. (https://www.mprnews.org/)

With the news that the Army Corps of Engineers has rejected Energy Transfer Partners’ permit to drill under the Missouri River (Lake Oahe), the dynamic of these protests has changed, and the nature of that change is still being developed.

This special presentation will bring together two people from the lowest reaches of the Missouri River to share the work they are doing here to support communities upstream.

Perry Bigsoldier has helped form a new organization in Columbia dedicated to supporting the Cannonball Camps, Protectors of Land and Water – Columbia. He’ll share his understanding of why this struggle is so important at this time and place.

Christine Ingrassia, as a St. Louis Alderwoman, sponsored a successful resolution by the City of St. Louis Expressing Solidarity With Indigenous Resistance to the Dakota Access Pipeline   She’ll share her stories visiting the upstream camps as well as her ongoing work on the ground and on the rivers of St. Louis.

We will also be joined by Ashland resident Mike Jones, who will give a brief update from his trip to the Oceti Sakowin camp last week as part of the veteran contingent supporting the camps.

Dig deeper for more info on this topic –