The Osage – People of the Middle Waters

HIstorian Michael Dickey will share some of the unique history and importance of the Osage Nation in the history of the Missouri River and the state of Missouri. 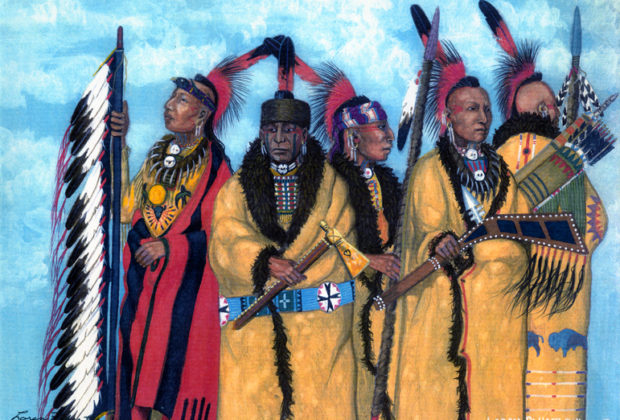 As the first Spanish and then French explorers pushed up the Missouri and Osage Rivers, the Osage nation was one of the most powerful groups in the area, controlling much of the trade between the prairies, the Ozark woodlands and the big rivers.

The Osage story parallels the history of so many tribes encountering the westward push of America’s growth, and yet they were able to protect a portion of their ancestral heartland.

The official seal of the Osage Nation. https://www.osagenation-nsn.gov/

In the 1700’s, the Missouri River was the northern edge of the Osage empire. The Osage cooperated and traded with many other river tribes in the region, even establishing villages next door to the Missouria Indians right in the middle of what is now Missouri. The tribe called themselves Ni-U-Kon-Ska, or People of the Middle Waters. They are now known as the Osage, which is a French version of the name of one of their sub-gens also known as the Water People, or Wa-zha-zhe. The Treaty of the Osage, signed in 1808, ceded Osage land in Missouri and Arkansas to the expanding U.S. and the majority of Osage began their move to what would become Osage County in Oklahoma.

Historian Mike Dickey, who is also the site administrator for Arrow Rock State Historic Site, will share some his deep knowledge he’s gained about the history of the Osage along the Missouri River and throughout what is now Missouri. His knowledge of Osage history, as well as his relationships with modern tribe members, give him a unique ability to paint an accurate and compelling portrait of these important historical Missourians.

The modern Osage nation is centered in Pawhuska, OK, in Osage County in the middle of Oklahoma oil country.

Michael Dickey is the Site Administrator for Arrow Rock State Historic Site. He is the author of “People of the River’s Mouth – a Search for the Missouria Indians” and “Arrow Rock: Crossroads of the American Frontier”. He is also the Asst. Fire Chief for the Arrow Rock Community Fire Dept.

Just a 10-minute walk from the Plaza shopping area, the Discovery Center is a unique, hands-on, urban conservation education center located on eight acres in the heart of Kansas City. It is on Troost Ave., between Emanuel Cleaver II Blvd and Volker Blvd.

Did deep for more info on this topic –