Barry Poulton will share the research he’s done into the macroinvertebrate communities of the Missouri River and what they tell us about the quality of the water and habitat on the channelized lower river. 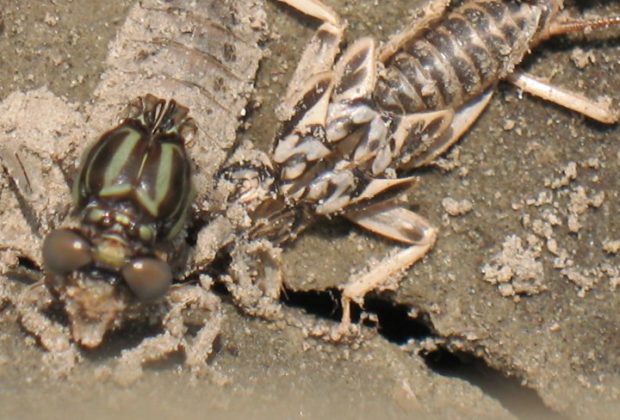 An adult dragonfly emerges from the nymph form next to an empty stonefly molt on a Missouri River bank. photo by Lisa Hamilton. 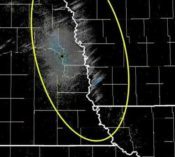 In July 2018, a mayfly hatch along the Missouri River showed up on National Weather Service radar (the streaks radiating from the river on the Nebraska border).

The amount of small macro-invertebrate life in the Missouri River is staggering. Massive mayfly hatches have been known to show up on Dopplar radar, looking much like an approaching storm (see image on right, actually from the Mississippi River). When the river is at its lowest, usually in the winter, the rocks that line its banks are completely coated in millions of slimy caddisfly cases left high and dry by the depleted water. Sandbars have been known to erupt overnight with the emergence of adult dragonflies.

The importance of this teeming lifeforce, one of the foundations of the big river food chain, is undeniable. Yet very little is known about the populations, habitats and life history of the macroinvertebrate life in the Big Muddy. Much of what we do know is due to a USGS study led by Barry Poulton focused on developing big river sampling techniques classifying the various communities they found in different habitats, and using various indicators to evaluate the status of aquatic life in the Big Muddy.

Sampling such a huge ecosystem, with its diverse habitat sites and erratic river levels, was one of the biggest challenges the biologists face. Barry will also talk about some of the inventive methods the scientists came up with to collect their samples, including deployment of rock baskets and sucking out the water from river sediments to study quality of dike pool habitats. 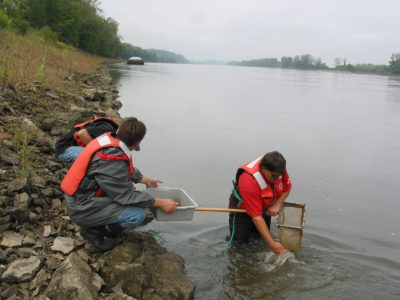 From erratic river levels to oncoming barges, there are a lot of tricks to sampling macroinvertebrates on the Missouri River.
Photo courtesy of Barry Poulton, USGS

Barry Poulton, Ph.D, has been a research ecologist with the USGS River Studies Branch since 1990 studying aquatic entomology and pollution ecology. In addition to his work on Missouri River macroinvertebrates, he is studying the effects of urbanization on macroinvertebrate communities in streams surrounding the Kansas City metropolitan area, and is also studying the macroinvertebrate diet of invasive black carp that now inhabit our largest river systems.