Join us for a special screening of “River of Change”, a National Park Service documentary about the Missouri National Recreational River, followed by a presentation by geologist Carrie Elliott on what she’s learned about this special reach of the river. 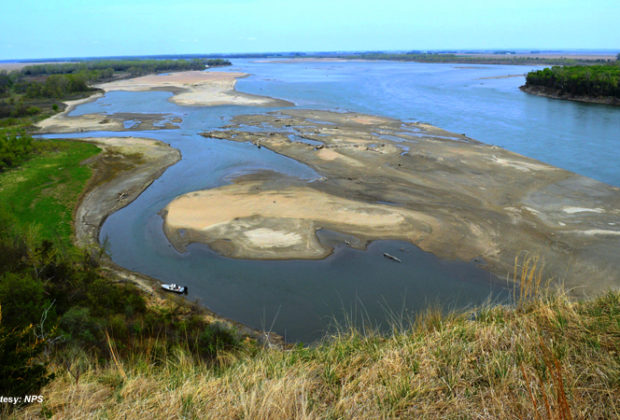 This photo shows the natural braided nature of the MNRR's complex channel and sandbar habitat. Photo courtesy of NPS.

This month we’ll be taking a deeper look at the Missouri National Recreational River (MNRR), a segment of the Missouri River that is managed by the National Park Service. We’ll start by viewing “Rivers of Change”, a short 20 min. film just completed by the National Park Service that shows the character of this section of the Missouri River throughout the seasons and through the eyes of the diverse people that live there. Then, USGS geologist Caroline Elliott will share 60 years of channel morphology data to show how the hydrology of this special section of river has changed since the construction of the dams.

There are two segments of the MNRR: the 39 mile segment running from the base of Fort Randall Dam down to Running Water, SD, just downstream of the mouth of the Niobrara River. The larger segment starts at Gavin’s Point Dam near Yankton, SD, and continues 59 miles to Ponca, NE. These sections of the Missouri River form one of several Wild & Scenic River reaches on the Missouri River.

These two sections of the river show both wild and highly controlled faces of the river. Because they are both unchannelized, they are wide, meandering, shallow and braided with many shifting sandbars and channel complexity. The MNRR gives a great window into what the character of the unchannelized and undammed Missouri River was like.

In contrast, the hydrology of this reach is completely controlled by the outflow from those two dams, creating a highly altered flow regime. Plus the dams trap most of the sediment in the reservoirs they create, meaning these special reaches of the river are more clear and move much less sediment than they naturally would have. This creates a bed degradation that can be pretty extreme. The sediment-laden Niobrara River flows into the Missouri River just upstream of Lewis and Clark Lake, the reservoir formed by Gavin’s Point Dam, where the Niobrara silt load is building a delta maze of islands and shallow channels slowly filling in the reservoir.

The recent flooding on the Missouri River brought national attention to this region, but the breaking news coverage barely scratched the surface of the challenges this reach of river faces. When the Spencer Dam burst on the Niobrara River, spilling its trapped sediment and ice downstream into Lewis and Clark Reservoir, it created an unprecedented rise in the lake and flooding in the delta region.

Caroline Elliott will help us understand how all of these factors are reflected in the shape and behavior of this special reach of river.