Robert Langellier will share his research into the science, policy, facts and people behind the Ideker Lawsuit. In this 2014 lawsuit, a federal judge ruled that some recent flooding along the Missouri River is due to U.S. Corps of Engineers management and the Corps can be held liable for some damages. The lawsuit has become an important factor in the response to the 2019 flood. 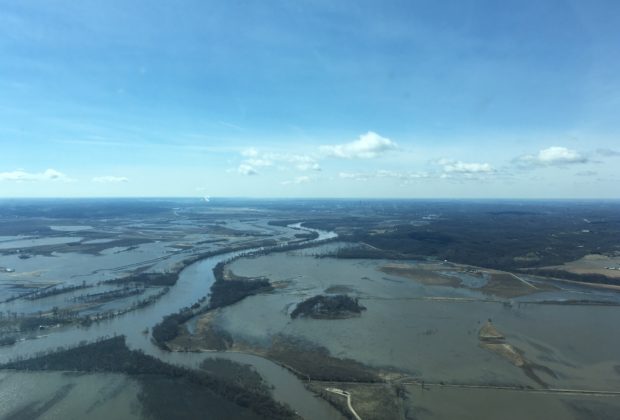 The Missouri River flood of 2019 has particularly impacted farmers and agricultural communities in the Missouri River floodplain. This pain is increasing calls from politicians and constituents to do more to stop flooding. There is a belief amongst some people that the U.S. Army Corps of Engineers has changed river management to benefit fish and wildlife, and that this has caused increased flooding. One piece of evidence that is often cited to support this idea is the Ideker lawsuit.

We’ll be joined by freelance journalist Robert Langellier, who has been traveled the Missouri River valley last year during the flood interviewing many parties involved in the lawsuit, scientists studying the river’s hydrology, the Corps officials charged with managing water flow, floodplain farmers and conservationists. Robert said, “We’ll try to understand that complex science (I once thought hydrology was as simple as ‘water flows down’!). We’ll also discuss the case’s implications for Missouri River management through the perspectives of farmers, Army Corps engineers, environmentalists and barge shippers.”

Robert Langellier is a freelance writer who recently published a piece on the Ideker lawsuit in The New Territory magazine, the “autobiography of the Lower Midwest”. He has published pieces in Esquire (about long haul trucking and python hunters), The Nation, The Awl, Kansas City Star and others.

Kansas City Digital Video will be recording this Big Muddy Speaker Series presentation. KCDV has recorded a stunning collection of BMSS talks. They are available on their website at this link and on their YouTube channel (amongst other recordings). These are very high quality recordings and represent a treasure of knowledge about the Missouri River and the natural history of Kansas City.