Jameson Island: “Where are we Now?”

Presentation by Zach White and Laurie Farmer, U.S. Army Corps of Engineers Missouri River Recovery Program
Zach White and Laurie Farmer from the U.S. Army Corps of Engineers (Corps) will cover the Jameson Island shallow water habitat project currently under construction in the Big Muddy Wildlife Refuge near Arrow Rock, Missouri. The Corps will discuss the overarching Missouri River Recovery Program and how it relates to the Missouri River, and historic actions on the river leading to three listed species. 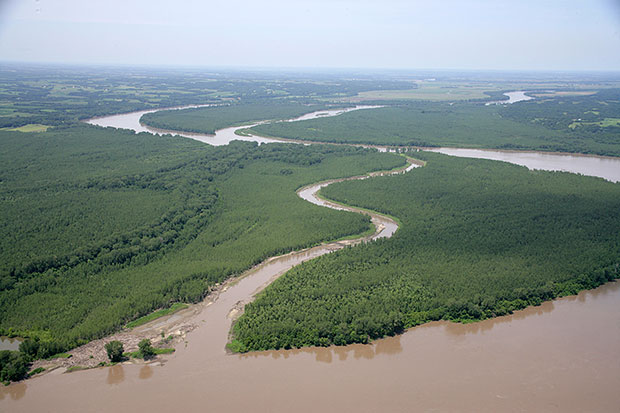 In December 2006, the U.S. Army Corps of Engineers (Corps) began construction of a side channel chute at the Jameson Island Unit to re-create Shallow Water Habitat (SWH) benefiting the endangered pallid sturgeon and other native fish and wildlife species.  The chute, when completed, would be approximately 9,630 feet long, 200-feet wide; and approximately 5-feet deep during average August flows.

In 2007, the Corps voluntarily halted construction in response to concerns about water quality raised by the Missouri Clean Water Commission.  Natural river processes since that time removed the remainder of the material needed to fully complete the chute.  In 2013, the Corps began construction on an extension to the chute in an effort to restore an additional 30 acres of SWH through a combination of hydraulic dredging and natural channel widening.

Zach White and Laurie Farmer from the U.S. Army Corps of Engineers (Corps) will cover the Jameson Island SWH project currently under construction in the Big Muddy Wildlife Refuge near Arrow Rock, Missouri.  The Corps will discuss the overarching Missouri River Recovery Program and how it relates to the Missouri River, and historic actions on the river leading to three listed species.

The speakers will also discuss the Jameson Island project from a planning development perspective and controversies surrounding construction methods.  They will also describe the programmatic and during construction water quality monitoring and the status of the recommendations of a National Academy of Sciences study completed in 2011.   Lastly, the Corps speakers will discuss how the development of SWH fits into the management of other Corps missions, the requirements of the amended 2003 Biological Opinion, and requirements as authorized in the Water Resources Development Acts of 1986 and 1999.

The Missouri River Recovery Program is an effort to replace lost habitat in order to avoid a finding of jeopardy to threatened and endangered species (pallid sturgeon, least tern and piping plover) resulting from U.S. Army Corps of Engineers (Corps) projects on the Missouri River. This program includes development of emergent sandbar habitat, shallow water habitat, and wetland and terrestrial habitat. It also includes ongoing data collection and monitoring to determine if these actions are effective and an adaptive management process to ensure these efforts are meeting the goal to recover the listed species.  These efforts are requirements outlined by the 2000 Biological Opinion, amended in 2003, issued by the U.S. Fish and Wildlife Service and Water Resource Development Acts of ’86, ’99, and ’07.

Thanks to all of our venue hosts for making this possible!

Kansas City Digital Video has been recording Big Muddy Speaker Series presentations. These are available on their website at this link. Some contain synchronized powerpoint presentations. We will be posting these to the archived presentation pages on bigmuddyspeakers.org.

Thanks Micheal Morgan and crew for putting this important archive online!