Cancelled – Jameson Island at another crossroads

UPDATE – Due to the federal government shutdown, our presenters have cancelled their talk. We will still be gathering at Minsky’s for an informal discussion on the future of the Speaker Series and your ideas on improving it! Please join us! 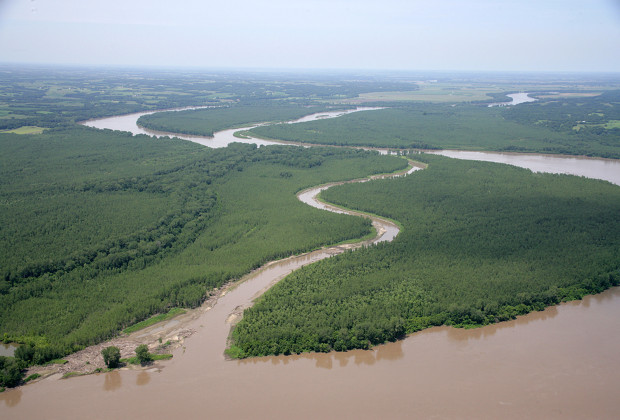 UPDATE – Due to the federal government shutdown, our presenters have cancelled their talk. We will still be gathering at Minsky’s to discuss the future of the Speaker Series and your ideas on improving it! Please join us!

NEW LOCATION: This month’s presentation will be at Minsky’s Pizza in the City Market – 427 Main St., Kansas City, MO

Governor Jay Nixon last week, at the request of many farmer groups in the state, sent a letter to the Corps of Engineers requesting that they halt work on the the Jameson Island Chute Habitat Project, which has been controversial since chute excavation began in 2006.

Farmer’s groups and the Missouri Clean Water Commission have maintained that dumping of excavated alluvial soil in the Missouri River pollutes the river and contributes to the hypoxic zone in the Gulf of Mexico. The Corps along with conservation groups claim that alluvial sediment is actually beneficial to the Missouri River system and that incorporating excavated sediment into the river is the most efficient way to recreate much needed habitat along the river.

Zach White and Laurie Farmer from the U.S. Army Corps of Engineers will lay out the history of the project, the science behind it, and the Corps’ reaction to the Governor’s letter.

In 2006, the Corps of Engineers began work on creating a new chute on the Jameson Island Unit of the Big Muddy National Fish and Wildlife Refuge, essentially recreating Jameson Island itself. The chute is part of a plan to recreate varied habitats that were destroyed by the channelization of the river.

The project was shut down by a string of concerns and controversies about the placement of the chute and the dumping of excavated soil in the river, but the river itself finished the job during the high water events of 2008. However the Missouri Clean Water Commission imposed a moratorium on more chute excavation projects in the state requesting an independent review of the effects of dumping alluvial sediment into the river.

In 2011, the National Academy of Sciences published an independent review of the project, concluding that Corps’ habitat projects would be a minimal contribution to Gulf hypoxia while providing small benefits of sediment transport.

When the Corps proposed lengthening the chute it again in 2013, Jameson Island again became a flashpoint of controversy. This combined with a political reaction to the Flood of 2011 that suggested the Corps should stop work on fish and wildlife to concentrate on flood control has resulted in a letter from Governor Jay Nixon to the Corps requesting that the Corps stop work on chute excavations.

So environmentalists and conservationists side with the Corps of Engineers about dumping dirt in a river, and farmers, who continue to adopt and improve soil conservation methods, are fighting both with a warning of pollution in the Gulf of Mexico? What is going on here?

We’ll hear from the side of the Corps of Engineers this evening and hope you can join us.