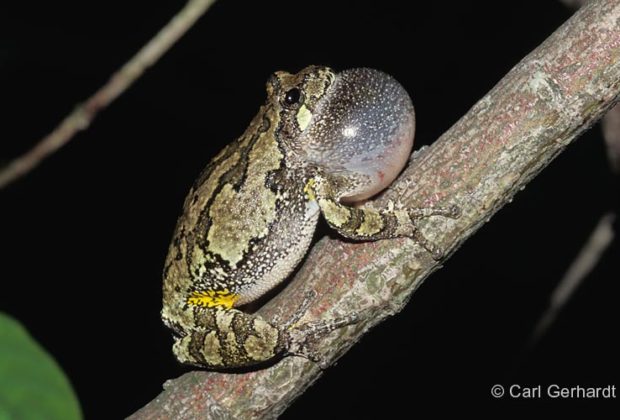 Missouri has an abundance of frogs that depend on pools and ponds in the floodplain of the Missouri and other rivers and streams.

Carl Gerhardt, a retired biologist with the University of Missouri-Columbia who has been studying frog vocal communication, will discuss the fascinating story of the common gray treefrog. It turns out that what we know as the common gray treefrog is at least two different species that can only be told apart by differences in the male call.

Carl discovered the properties of the call that are used by females to recognize males of their own species and to even distinguish among those males to select males that provide “good genes” to her offspring. He’ll share the story of his discovery as a detective story. The latest puzzle regards the evolutionary origins of one of the two species by a form of “instant” speciation – a doubling of the chromosome number.

Carl will play back and describe the calls of the two species: the eastern gray treefrog (Hyla versicolor), which is a tetraploid (4 sets of chromosomes) and the only species found in Boone County and Cope’s gray treefrog (Hyla chrysoscelis), which is a diploid like all other frog species in the USA and which occurs in the southern and northern parts of the state.

He will also describe his playback experiments to females. By using computer-generated calls, he identified the physical properties of the calls that females not only use to find a male of her species in places where both occur but also to find a male of her own species whose sperm will improve the viability and growth rate of her offspring. He will also describe the discovery of multiple origins of the eastern gray treefrog (yes, there are two, if not three origins) and the probable existence of different species of the Cope’s gray treefrog.

Dig deeper into this topic