Arrow Rock in the 1800s: A Missouri River Town

Archeologist Robin Machiran will be sharing the stories of Arrow Rock as found sifting through the soils and archives of Missouri River history. She will share details learned about Arrow Rock’s African American community during a recent mapping and surface survey of the Sappington Negro Cemetary there. 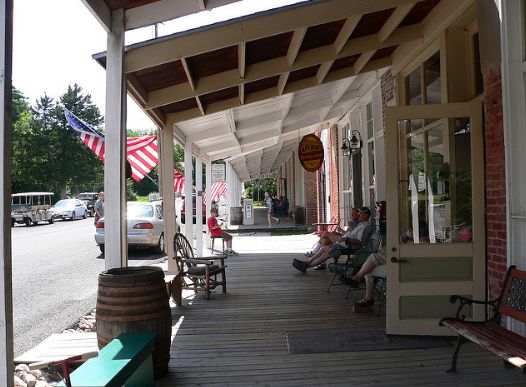 Arrow Rock is up on a bluff several river bends upstream of Boonville. An important part of the once-thriving Little Dixie agricultural economy, Arrow Rock is now isolated from the river by a slab of bottomland where the steamboat landing used to be. The entire town is on the National Register of Historic Places, and a portion of the village is a State Historic Site.

The land that was to become Arrow Rock was the location of short-lived Ft. Sibley. In 1817, a ferry was established across the Missouri River in Howard County with its landing at Arrow Rock. Beacause of that,the town is considered a starting point for the Santa Fe Trail. Steamboat traffic along the Missouri River also found Arrow Rock a convenient landing spot, increasing its appeal. In 1829, area citizens met to elect commissioners to select a location and lay out a town. On June 24, 1829, land was donated by Burton Lawless and John Bingham to establish the town of Arrow Rock.

Even with the level of historical work that’s been done in this town, there is a lot to discover, especially about the African American community that lived here.

Robin Machiran tells the story of Arrow Rock through the eyes of someone who has sifted through the town’s soil and archives looking for clues left by its prior citizens. She is a staff archeologist for the Archaeological Research Center of St. Louis. ARC is a private company that focuses on cultural resource management. They recently completed several projects mapping the Sappington Negro Cemetary as well as digging into the archives to uncover African American history in this important crossroads and river community.

Dig deeper on this topic –

A special thank you to Greg Poleski and Mike Garvey of Greenway Network for making this happen!