The Missouri River: Then & Now 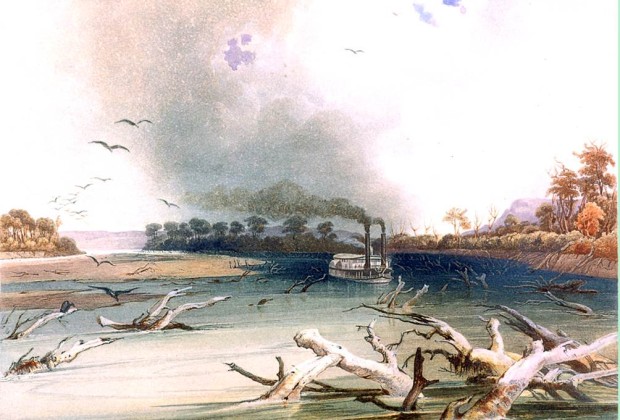 Swiss painter Karl Bodmer captured this painting on a steamboat trip to the Upper Missouri River in 1833. The painting shows the treacherous snag filled shallows of the unchannelized Missouri River.

at the Les Bourgeois Bistro in Rocheport, MO.

The Missouri River we enjoy today is a completely different character than the river that Native tribes lived with and Lewis and Clark’s crew poled up against. The historic river was on average 3 times wider, several hundred miles longer, carried 5 times more sediment and could never decide one day to the next just where it wanted to be. Its flood pulses reflected the seasons as they played out across the river’s massive watershed.

The challenges that steamboats encountered on this wild river in the 1800’s led to a push in the mid-1900’s to tame, deepen, channelize and straighten the Missouri River for navigation and to stabilize its banks for agriculture. This highly successful river engineering project has been followed by an effort to restore a few pieces of habitat lost during the channelization. 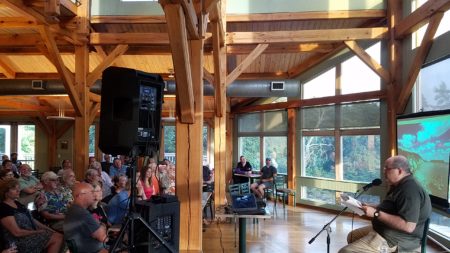 Mike Dickey presented to a full house of 80 attendees at the Big Muddy Speaker Series at Les Bourgeois Bistro.

Michael Dickey has been employed by Missouri State Parks since 1986.  He is currently the administrator of Arrow Rock, Boone’s Lick and Sappington Cemetery state historic sites. He is a board member of the Boonslick Historical Society and a past board member of the Santa Fe Trail Association.

Mike is the author of two books “Arrow Rock: Crossroads of the Missouri Frontier” which won the Missouri Governor’s Humanities Award in 2005. He also wrote “The People of the River’s Mouth: The Search for the Missouria Indians” in 2011, the first book ever published about the native people from whom the river and state took its name.  In 2014 he co-authored a chapter of “Archaeology of the War of 1812.”

Mike has been a lifelong student of Missouri’s natural and cultural history and Native American history and cultures.  He has collaborated on projects with the Osage Tribal Museum and the Wah-Zha-Zhi Cultural Center of the Osage Nation in Pawhuska, Oklahoma and has connections with the Otoe-Missouria Tribe of Red Rock, Oklahoma and the Iowa Tribe of Kansas and Nebraska.