The Missouri River: Starting Point for the Western Trails 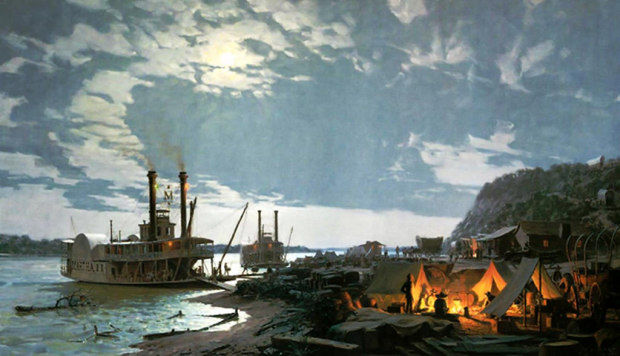 For many pioneers headed west, the Missouri River served as the first leg in their journey to the Western Trails.  Travis Boley, Association Manager for the Oregon-California Trails Association, discussed rethinking the Missouri River in terms of its unique status as a waterway that doubles as a National Historic Trail.

At the time he was already engaged in creating a 40 mile hiking/biking trail in the shared historic corridor of the Oregon/California/Santa Fe Trail from Sugar Creek to Gardner. It will intersect with the Katy Trail Extension at 63rd and Blue Ridge Blvd. in Raytown, making it possible for hikers and bikers to easily access the Missouri River at the former Wayne City Landing near present day Sugar Creek.

His grander vision included opening up wide swaths of the Missouri River shoreline to allow similar non-motorized access to our metro area’s riverfront, including trails that connect the remaining historic sites from the Lewis & Clark Expedition and the old riverboat landings for the wagon roads. This concept would fully realize the idea that Congress established in the 1968 National Trails Act, which called for the building of “retracement” trails in such corridors to forever preserve them. 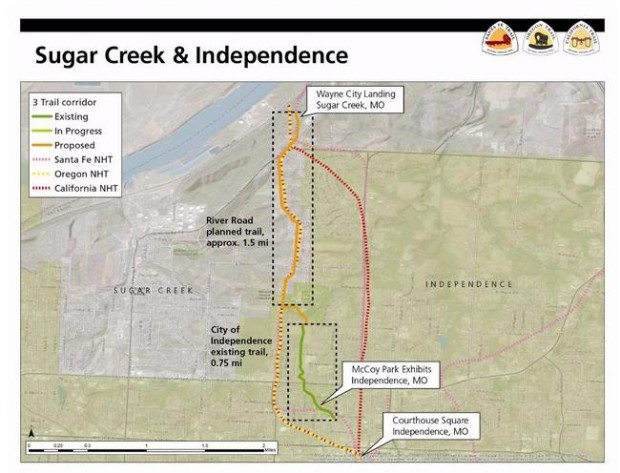 Travis Boley is the Association Manager of the Oregon-California Trails Association. He has held this position since 2003. Prior to this, he was the Executive Director of the Pony Express National Museum in St. Joseph, Curator at the International Bowling Museum and Hall of Fame (formerly in St. Louis), and Curator at the Basketball Hall of Fame in Springfield, Massachusetts. He earned a BA in History from UMKC and a Masters in Historical Administration with an emphasis in Archaeology from the University of Kansas. He lives in Independence.