FILM: Big Muddy Moose – The Missouri River on a Stand Up Paddleboard 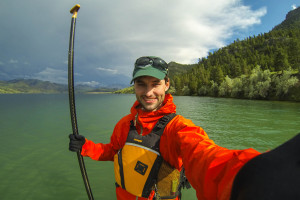 In 2013, Scott Mestrezat was the first person to standup paddleboard the entire Missouri River. Find out more on his website: www.missouririversup.com

The Missouri River Relief crew got to rendezvous with Scott and fellow river expeditioner Janet Moreland near Plattsmouth, NE, on our way to a river clean-up in Omaha. photo courtesy of Scott Meztrezat.

Scott Mestrezat filmed his entire journey as the first stand up paddleboarder to travel the entire Missouri River. We will be one of the first audiences to see the final result – this inspiring and beautiful film of an amazing river trip.

In 2013, Scott quit his job, built a wooden stand up paddleboard, and then paddled the entire Missouri River. From Three Forks, MT, through the string of massive lakes, then down to the Confluence of the Missouri and Mississippi River, Scott finished his journey below the St. Louis Arch.

Scott joined us via Skype, and the film was introduced by Colombia’s own Janet Moreland, featured in the film, who became the first woman to solo paddle the entire Missouri/Mississippi River Source to Sea in 2013.

Our gratitude to RagTag for welcoming us and donating their space for this fundraising event!

Janet Moreland spent many days paddling the river with Scott. She took this photo near Omaha, showing all the gear Scott was carrying on his board. photo by Janet Moreland

Usually takes place at Les Bourgeois Bistro in Rocheport. For November and December of this year we are moving to Ragtag Cinema in Columbia. The Speaker Series is hosted by these wonderful partners.

Special thanks to Ragtag Cinema for donating the venue for November and December!

← FILM: “Bag It – Is your life too plastic?”
Concepts and Character of the Mississippi River as seen through the Records of Early Explorers →