LEO: Bringing Together People to Protect the Big Muddy, Floodplains and Drinking Water

n the fall of 2009, the topic of a proposed coal ash landfill  in the Missouri River floodplain monopolized the conversation at a local book club meeting in the small river town of Labadie, home of Ameren Missouri’s largest coal-fired power plant. Within one month, the group had organized as a nonprofit and held its first meeting in the basement of a local church.

The group is now called Labadie Environmental Organization (LEO) . The group has been a key force in mobilizing local opposition to permitting of coal ash storage in the Labadie Bottoms, a section of Missouri River floodplain upstream of the St. Louis area. 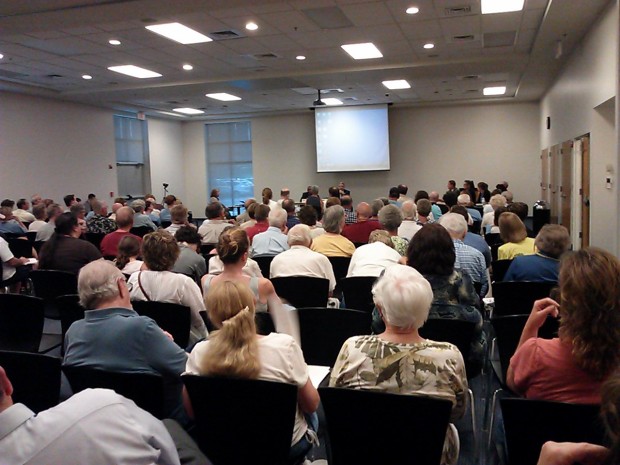 A packed house at the Public Service Commission meeting in Union, MO, on June 25, 2013. photo courtesy of LEO.

LEO’s success has been in giving voice to local people and in doing so, has begun the reclaiming of community power in making decisions that impact the environment and local economies. LEO President Patricia Schuba shares the story of how LEO formed and how it stayed true to its original mission to represent and empower impacted communities. She shares organizational choices which allowed LEO to stay together and effectively lobby on behalf of the floodplain and people. She shares information on the dangers of coal ash, current issues in energy and waste policy she is watching and how to message effectively on complicated scientific issues and how to build cross-community support.

Patricia Schuba is the President of Labadie Environmental Organization and the Director of the Coal Ash Program at Citizens Coal Council.

All speakers are presenting for free! Thank you all for sharing your knowledge with us!