Presentation by authors and publishers Crystal and Leland Payton, Lens and Pen Press.

The Osage River is one of two major Ozark tributaries to the Missouri River, historically serving as a river highway into southwestern Missouri for a few steamboats, logging rafts and spawning paddlefish. It’s history is deep and largely ignored, from its importance to the Osage Nation to the convoluted stories of the building of Truman and Bagnell Dams. 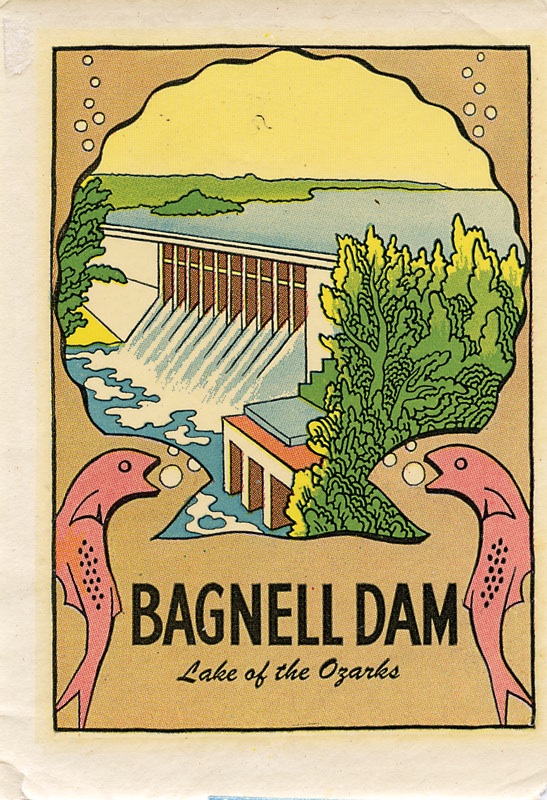 A tourist souvenir decal of Bagnell Dam.
courtesy of www.dammingtheosage.com

Leland and Crystal Payton have been digging up and chasing down this complex story for many years. The result is a beautiful and comprehensive book called “Damming the Osage – The Conflicted Story of Lake of the Ozarks and Truman Reservoir”. The book recently won the silver medal in Best Regional Non-Fiction Mid-West  in the 2013 Independent Publishers Book Awards.

Leland Payton played in important role in a ill-fated attempt to stop Truman Dam from being completed in the 1970’s. His perspective on those events is invaluable, but his deeper interest in the troubled Osage River enables him and his wife to craft a thorough and surprising history of that event as well as the longer story of how corruption, politics and hubris reshaped the river itself.

The Paytons shared the story of the Osage River, and how their lives have been woven into that story.

generally takes place the second Wednesday of every month. It is hosted by Missouri River Relief, Friends of Big Muddy, Greenway Network, Big Muddy Adventures, the Big Muddy National Fish & Wildlife Refuge and the Columbia Fish & Wildlife Conservation Office (USFWS) . All speakers are presenting for free and Big A’s is sharing the space for free! Thank you for sharing your knowledge with all of us!

Find out more about this fascinating topic:

← Real flood risk in the Great Rivers State
Jameson Island: “Where are we Now?” →