How many so called “100-year floods” have you witnessed in your lifetime? Why are we continually surprised when floods of “unprecedented” heights hit our riverside communities? What did we learn from the Flood of 1993, 20 years ago, and what did we ignore?

Recent floods on major Midwestern rivers have set all-time record levels at numerous sites, prompting great overuse of the terms “100-year”, “200-year” and “500-year” floods.  This overuse is not trivial because the posited “100-year” flood levels have regulatory significance and affect property values.  Statistical methods prove that the calculated flood levels for extreme events are much too low, particularly because population stationarity has been assumed in official calculations, even though many factors such as climate change and in-channel structures are causing flood levels to rise.  New methods are proposed for the estimation of future flood levels that take secular changes into account.  These methods show that the official “100-year” levels are too low by 1 to 3 feet at many locations, and suggest that average levels attained by extreme floods will continue to rise by about an inch per year.

Dr. Bob Criss of Washington University discussed the science behind forecasting (or mis-forecasting) flood risk as well as the effects of changes we are making to the floodplains affect flood risk.

Robert E. Criss (PhD Caltech 1981) is Professor of Earth and Planetary Sciences at Washington University in St. Louis. Following his dissertation studies in Geochemistry Bob was a geologist with the United States Geological Survey, then Professor of Geology at UC Davis. He is author of Principles of Stable Isotope Distribution (Oxford, 1999) and co-editor of several books including At the Confluence: Rivers, Floods, and Water Quality in the St. Louis Region (MBG Press, 2003). Bob’s research embodies the quantitative explanation of huge data sets on diverse natural systems, typically involving the development of original mathematical formulae. His published papers and editorial commentary encompass many disciplines and have appeared in 38 different scientific journals, several government publications, numerous books and 4 newspapers. 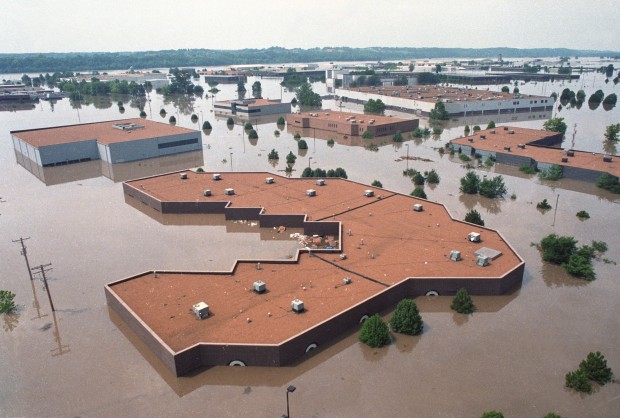 ← The River Beneath the Missouri River
Damming the Osage →