The Rock That Gave Birth to Kansas City

A ledge of rock along the south bank of the Missouri River at Kansas City served as an all weather landing (or wharf) for thousands of paddle-wheeled steamboats over an interval of 75 years. Although the bluff that the original town of Kansas was perched on has since mostly been removed, a chunk of natural limestone still remains, poking through the rock rip-rap that lines the bank below the Main Street pier. 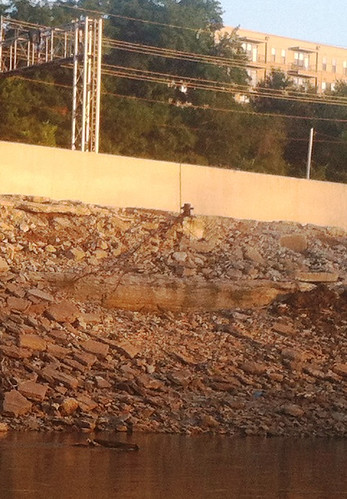 This rock landing speeded up the development of Kansas City by 2 or 3 decades and is testimony to the benefit that geology has contributed to the building of a city.

Join Dr. Gentile for a glimpse back in time to the beginning of our river city all through the lens of a piece of history we still have.

The Big Muddy Speaker Series is a free monthly series of presentations on Missouri River ecology, history, biology and more by experts in their field. There are now three separate series, in Kansas City, Rocheport and St. Charles.

← Sustainable Thus Far: A History of Habitation at the Confluence
Building a Natural Legacy in Boone County →