Intersex Sturgeon on the Missouri River? The effects of emerging contaminants on a big river

Those fish were shovelnose sturgeon, which are considered a valid experimental surrogate for the federally endangered pallid sturgeon. Diana’s discovery began more than a decade of research into this phenomena, focusing on finding the chemical and environmental causes that are present in Missouri River water that might be effecting the reproduction of the pallid.

This research has been ongoing during a period when a lot of research into “emerging contaminants” in our water supply has shown disturbing effects of phyto-estrogen compounds and other endocrine disrupting chemicals. 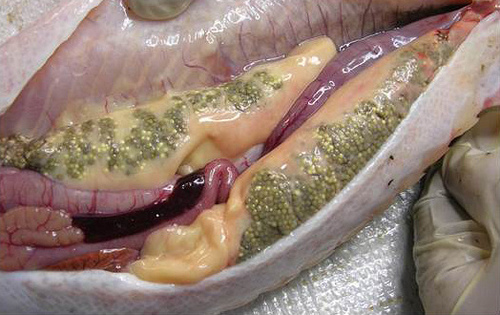 This dissection of an intersex sturgeon shows both male and female reproductive tissue. photo courtesy of Diana Papoulias, USGS.

Diana described the reproductive effects they’ve documented in fish, what is known about the chemical contaminants in the Missouri River, and the pathways for how these chemicals are causing such dramatic changes in fish.

Diana Papoulias, PhD, is a retired Research Fish Biologist at the USGS Columbia Environmental Research Center. The primary focus of her study is to investigate factors that disrupt normal developmental and reproductive processes in fishes. In 2014 and 2015, she served as the fish biologist and toxicologist on the XXpedition, an all-woman team of scientists, activists and artists studying plastics in the Atlantic Ocean.

Is a monthly series of presentations that takes place in three different cities: Rocheport, St. Charles and Kansas City.

The series is a collaboration of these wonderful partners –

Check out our homepage for more info on upcoming presentations in each location.

← “Too much water, not enough water – Balancing the 8 ‘Authorized Purposes’ of the Missouri River”
Water One’s Extreme Climate Challenges →