John Colter was a key member of the Lewis and Clark Expedition. He left the Expedition on its return trip to guide fur trappers. On this journey he was credited with discovering the area that became Yellowstone National Park (it was originally called “Colter’s Hell”). He was later was captured by Blackfoot warriors. Stripped and told to run, he was the target of a “human hunt.”

Conger “Tony” Beasley will read from his latest work “Colter’s Run” and discuss the legacy of Colter, who later settled near New Haven, MO, on the bluffs overlooking the Missouri River. 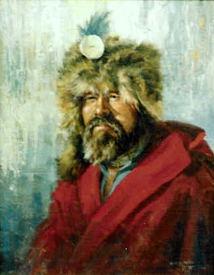 Conger Beasley, a long time Missouri River enthusiast, lives in St. Joseph, Missouri and is the author of many books and essays including:
•Sundancers and River Demons: Essays on Landscape and Ritual
•We Are a People in This World: The Lakota Sioux and the Massacre at Wounded Knee

The Big Muddy Speaker Series is also held in Rocheport and St. Charles.