“No Longer Estranged – A History of Urban Rivers” 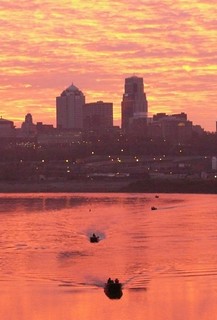 Many of our cities were founded on the banks of major rivers. Once they were highways connecting our communities to each other, our rivers became neglected dumping grounds as our cities turned their backs on them, embracing a future of railroads and then highways.

Kansas City is a perfect example, and is a good example of how cities are beginning to remember the important resource these rivers are for their identity, history and health. Amahia Mallea has been studying the difficult history Kansas City has with the Missouri River, and used KC as a template for talking about the renaissance urban areas are having with their rivers.

We we’re lucky Prof. Mallea joined us from Iowa to share her insights and hope about the relationship Kansas City has with the river that runs through it.

The Big Muddy Speaker Series is also held in Rocheport and St. Charles.

Another Chance to catch Amahia’s presentation

If you are unable to catch Prof. Mallea’s presentation on Wednesday, she will be giving the same talk the night before, at 7:00 p.m. on Tuesday at the Lakeside Nature Center, 4701 Gregory in Kansas City.

← “The Prehistory of the Lower Missouri River”
“Paddle Strokes through History: A Big Muddy Adventure on the Lewis and Clark Water Trail” →