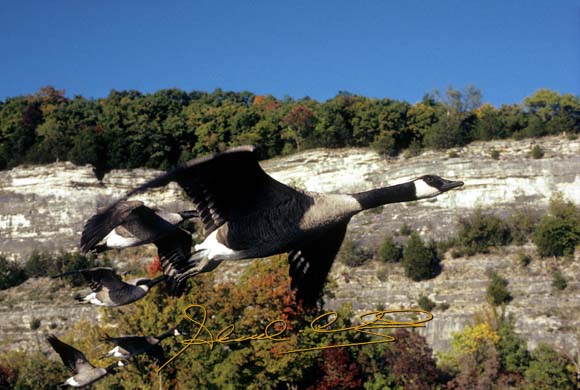 Canada geese are an inextricable thread of the Missouri River ecological tapestry. While tens of thousands migrate up and down the river valley each fall and spring, remnant populations of “Giant Canada geese” continue to nest in the limestone bluffs along its banks. They crowd noisily on sandbars and form giant, confused “v’s” in the sky during migration. That wasn’t always the case. By the 1930’s, these intimidating birds were thought to be extinct. Restoration began in 1949 in Missouri, and we are all witness to its success.

World renown wildlife photographer and filmmaker Glenn Chambers shared a unique view of these ubiquitous birds and the story of how he trained geese to fly alongside an aircraft to capture unparalleled images of geese in flight through the Missouri River valley. 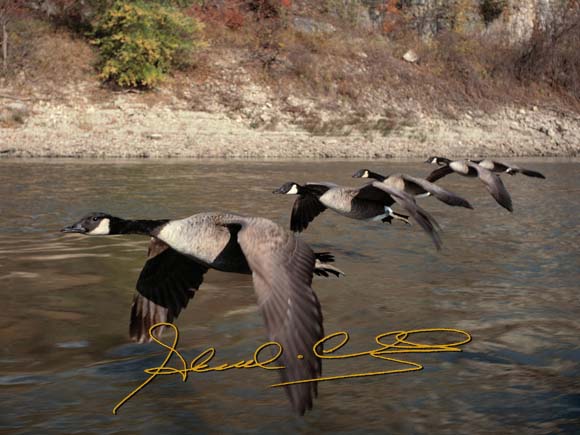 In 1998, Glenn produced an educational film for the Missouri Dept. of Conservation (MDC) called “Back to the Wild”, detailing MDC’s successes in restoring populations of deer, turkey, grouse, canada geese, river otters, paddlefish and sturgeon throughout the state. In producing this beautiful film, Chambers took on a unique challenge: capturing close-up footage of geese in flight.

He acquired a permit from the US Fish and Wildlife Service for imprinting geese and set about training them to fly alongside an ultralight aircraft as if in natural formation. His presentation for us will tell the story of how he did this, along with some of his wonderful footage.

Glenn Chambers is a retired wildlife biologist, having worked for the Mo. Dept. of Conservation and the US Fish and Wildlife skills. His talent for photography, video production and ability to interpret conservation to the public led to a second career in wildlife filmmaking and photography. He also served as the Regional Director of Ducks Unlimited. He is famous in Missouri as the “Otter Man” for his films and presentations involving his domesticated river otters. Chambers lives in Columbia, MO, where his yard is occasionally infested by pink flamingos.