An approach to shore on the Missouri River is often preceded by the plops of a variety of turtles as they dive into the muddy water. Because of the scale and turbidity of the river, assessing the population and habits of the variety of turtles there is a tough task.

Graduate Assistant biologist Stephanie Zimmer shared the different varieties of turtles on the river, what is known about their life cycles and what her research on soft-shell and snapping turtles has shown about their populations. 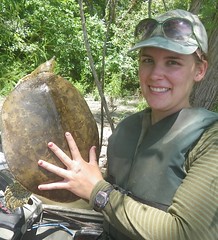